Classified as a National park, Samaria gorge is the longest gorge in Europe with a length of 18klm. It is well known for its awesome beauty and is the main attraction for nature lovers and hikers. The gorge’s entrance Xyloskalo (wooden step) took its name from the wooden stairs that used to be there to make the descent easier. The gorge is open to visitors from May to October mainly because of safety reasons, as the brook that flows along the trail during the summer becomes a rapid stream in the winter. The flora and fauna in the gorge is rare with most important the wild Cretan goat “Kri-Kri”, the chin bearded goat with the thick curved horns that is threatened by extinction.
Halfway down the gorge is the old village of Samaria, which was deserted a few years after the nomination as a National park in 1962. One mile before the exit is the famous “Iron Gates” or “Sidiroportes” in Greek, the narrowest part of the gorge, where the rock walls rise up to 300m and the passage is 3m wide.
The passage of the gorge is a unique and sensational experience. As hikers leave the gorge, amazed by its beauty and tired from the long walk, they can face the Libyan sea and the refreshing swim is not far away. In Agia Roumeli, the village at the south end of the gorge, one can find plenty of restaurant and mini markets. This village is cut off from land but boats sail regularly to Chora Sfakion and Paleochora. 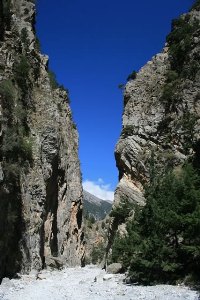 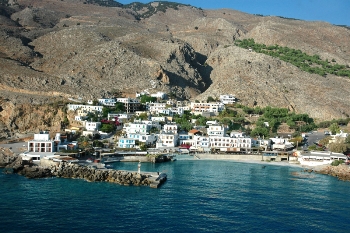