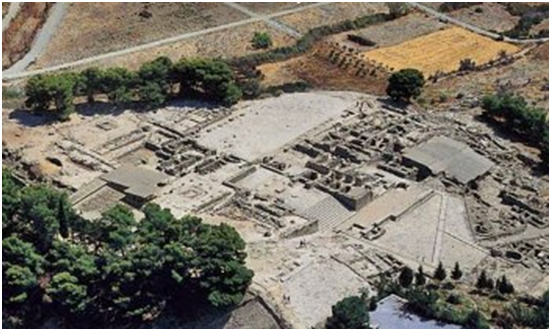 After Knossos, the second most impressive archaeological site is Phaestos. Built on a hill, it dominated the fertile valley of Mesara. The state of Phaestos possessed two strong harbours, Matala and Kommo on the southwest. The first palace was built around 1.900BC and among with other surrounding buildings covered 18.000 sq. m. The great earthquake that took place in 1.700 BC was the cause of its destruction. But a new, even more impressive palace was reconstructed in its place.
Phaestos continued to flourish during Archaic, classical and Hellenistical times, until 200 BC when it was destroyed by its rival Gortys. The famous Phaestos disk was found there, bearing spiral hieroglyphic script on both sides, designed when the potter's clay was still damp.
It is a unique piece, one of its kind and is exhibited in the archaeological museum of Heraklion.