Lyra
The basic and most important instrument for Cretan music. Lyra is not only an instrument, but a strong symbol of cultural identity. It is strongly connected to the traditional figure of the brave and rebellious Cretan man, dressed in black, bearing the black handkerchief around the head, a symbol of the sacrifices of the Cretan folk. Lyra is sometimes replaced by the violin.

Laouto (lute)
Laouto is the known Lute but a little bigger, with four pairs of chords that accompanies lyra. Sometimes it is used as a soloist instrument.

Mandolin
It was introduced by the Venetians and is very popular all over the island, but is not as important as the lyra and the laouto.

It is a kind of klarinet, known as the shepherds' instrument and it is usually made by them. It varies in sizes and it is a simple cane tube with holes.

Askavlos
This is an instrument similar to the bagpipes made of goat skin. It is seldom used these days. 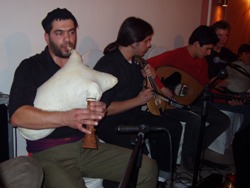