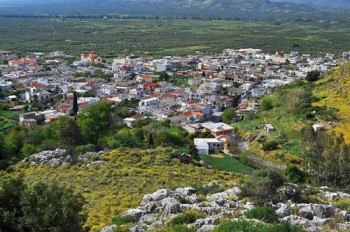 Messara is the largest plain in Crete, a fertile piece of land that is 45 klm long and 10 klm wide, located in the central south part of the island in Heraklion prefecture. The plain is surrounded by impressive mountains such as Psiloritis, Asteroussia and the Lassithi mountains. It is the most important agricultural region of Crete.
Two thirds of the total area are cultivated mainly with olive trees and grape vines but there are also vegetable, fruit and wheat fields. Phaestos, the second in size Minoan palace in Crete, Gortys the Greek-Roman settlement and also Agia Triada, the royal Minoan villa, can be found nearby.