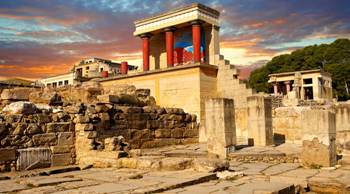 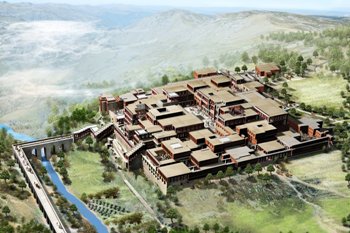 The first Cretans were believed to have reached the island in the 7th millenium B.C. They created the most brilliant of all early civilizations, based on sea trade. Taking advantage of the strategic location of Crete in the Mediterranean, the Cretan sailors developed commercial affairs with Egypt, Libya, Phynice, Minor Asia, Central Greece and the Aegean Islands.
The achievements of the Cretans were incomparable. When other people lived in caves, hunting birds and animals, the Cretans developed agriculture to such a great extent that it would lead them to the creation of an admirable civilization. It was Arthur Evans, the English archaeologist who, in 1900 discovered this forgotten civilization, which flourished and perished within a period of 1500 years. 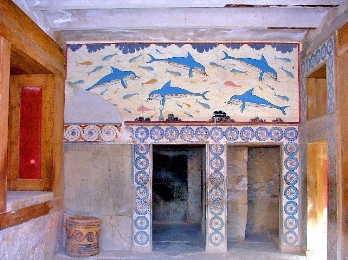 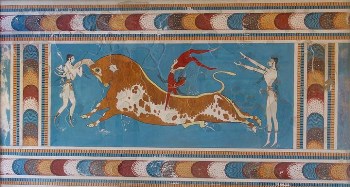 In around 1900 B.C. the island prospered and the first palaces of Knossos, Phaestos, Archanes, Malia, Kato Zakros and Kydonia were built.
King Minos ruled over the island in a huge palace, which was built on the peak of a hill, overlooking the Aegean Sea, 5 km away from the shore. Knossos was a multi-leveled construction which consisted of pillars and large staircases around a central court. The Minoans resented symmetry. The architects of Knossos built rooms in different sizes and shapes which communicated with each other through corridors to every direction. Many internal walls were composed of multiple doors, which changed the form of the room when they were opened. The palace occupied a space of 20 thousand square meters of rocky ground. It was an administrative as well as a cultural and religious center. It was also a storage space and a facility which produced ceramics and various items. Under its airy wings one could find the royal apartments, the shrines, the offices and the laboratories.
The Greeks of the less sophisticated Greece faced the magnitude and complexity of this labyrinthine construction with wonderment. During their visits they created the myth of the Great Labyrinth in which the monstrous Minotaur lived. 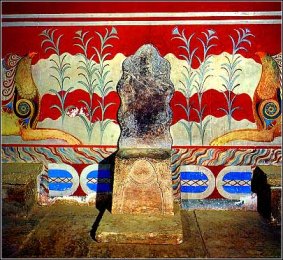 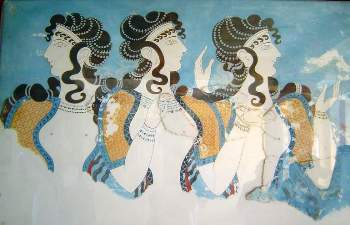 The word Labyrinth derives from the word "lavrys", meaning the double axe which was a holy symbol to the Minoans and which decorated the walls and the pillars. The name "Labyrinth" described the palace of Knossos as "the house of double axes". Actually what reminded more of the Labyrinth was the west multi-storey wing, where the king and his family lived in great luxury.
To the Minoan people religion and politics were closely related. The symbol of the bull, which is connected both with the Cretan religion and its leaders, is dominant. The officers of the palace had drink offerings in vessels shaped as a bull's head.
The king was the chief entrepreneur of the island. He controlled the commerce between Crete and the neighbouring countries. This explains the vast reaches of gold, silver and precious stones stored in basements under the palace. There were also vast supplies of wine and olive oil which were targeted for trade. 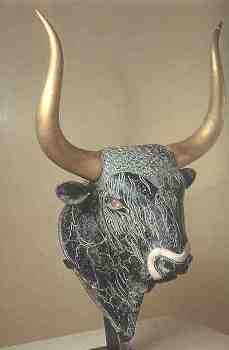 The Minoans were experts in water supply. They had invented an ingenious drainage system consisting of clay pipes, which were directly connected to a spring on a hill, 10 km away from the palace. Irrigation systems, paved roads and magnificent frescoes can also be admired in Knossos.
The Minoans were often afflicted with earthquakes. To prevent that from happening, and since they believed that earthquakes were the result of the anger of a bull-shaped god living under the earth, the Minoans held ceremonies to honour the god. At the end of these ceremonies, a bull was sacrificed.
But eventually no matter how many ceremonies they held, the inevitable happened.
In the beginning of the 15th century B.C. successive earthquakes and vibrations spread death and destruction. There were conflicts among the leaders of the island and finally the kingdom of Knossos prevailed. With an eliminated island due to internal disturbances, it was easy for the Myceneans to take over.
Finally, in 1450 B.C. an eruption from the volcano of Thira led to an enormous tidal wave of 60 m high, that flattened the docks and killed thousands of people in the densely populated west Crete. It also destroyed the ships of the Minoan fleet, leaving the island defenseless. Not long after the destruction, the palace of Knossos was surrendered to the Greeks. The palace itself burned down in a series of fire and ruins. The brilliant era of the Minoans perished.