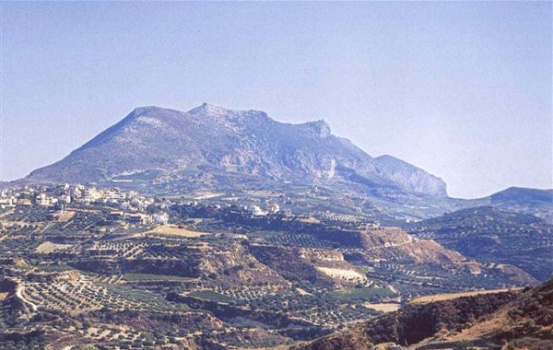 From antiquity to our days, Jouchtas was considered the mythical tomb of Zeus. Cretan Zeus had the unique ability to be mortal and that made the Cretans to be considered liars by the rest of the Greeks. The most probable explanation for that is that Zeus was linked with the more ancient god of fertility, who was following the natural circle and thus he was perishing and reborn every year.  It was also believed that someone (perhaps the architect of Knossos, Dedalos) carved a whole mountain in the shape of the sleeping Cretan Zeus. With its head facing the North and its legs towards the South, being hollow within so that the god’s chariots would emerge from its depth during the festivities, the mountain was a sight to admire and impress.
At mount Jouchtas a very important royal temple of the Minoan period was unearthed, that gave information on the structure of the temples as well as on the religion during this period.
On the highest point, a shrine was built over two deep hollows on the natural rock. Nearby, a deep cave-like hollow was discovered with its opening blocked by either a natural phenomenon or human intervention. Deep inside pottery and terracotta offerings were found, as well as a treasure of bronze double axes, votive bronze idols of men in the act of praying and votive human limbs.
The view of Heraklion and the Cretan sea from Jouchtas is breathtaking and the mountain is filled with the rich aroma from all sorts of herbs that grow there.