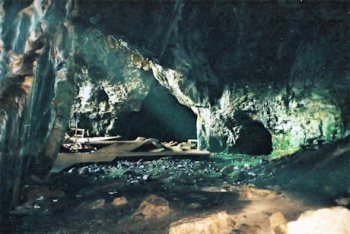 Ideon Andron is located on the eastern slopes of mount Psiloritis at an altitude of 1538m. According to mythology Zeus was hidden here by his mother Rea in order to protect him from his father Cronus, who ate his children to secure his dominion. Zeus was brought up here by the nymphs Adrasteia and Ida and was fed with goat Amaltheia’s milk and wild honey. When he cried Kourites protected him covering his cries by hitting their swords against their shields.

The cave was an important place of worship both in the Minoan and the Roman period. Important finds were revealed here, such as idols, ceramics, gold jewellery, bottles, tripods and some of them have oriental origin. Very important are the relief shields of the 8th and the 7th century BC that were found here. Since excavations are still in progress the cave is closed to visitors.