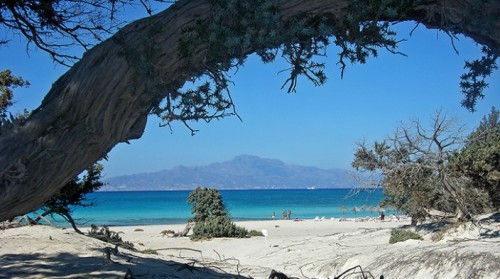 The uninhabited island of Chrissi lies in the Libyan sea, 14klm away from Ierapetra, a small town on the south coast of Crete. It took its name "golden" from the colour of the exotic beaches, which are covered by millions of colourful seashells.

The shallow crystal clear waters, the rear cedar forest on the sand hills and the sandy beaches make Chrissi the last paradise in the Mediterranean. The island has already been declared a National Park.

Chrissi was famous in the ancient times for the production and export of laver which was used in making royal clothes. The island of Chrissi was deserted when the last inhabitants were eliminated by the pirates who left behind the remains of the settlement, a silent witness of a barbaric era of the island's history.