Archanes is located 15klm south of Heraklion and 10klm south of Knossos. The famous Cretan table grapes are produced here as well as the Archanes wine. The town of Archanes is picturesque and traditional, with many old restored buildings and a walk around the narrow streets is always interesting, before resting in one of the tavernas on the main square where you can enjoy a real Cretan dinner.
Archanes was one of the most important areas in Minoan times. Coins of Knossos that were found in Archanes testify that not only the city was under the rule of Knossos for many centuries but also that it was not a palatial centre, even though it was a very important, independent and autonomous settlement.    geography-heraklion prefecture-archanes
Most members of the Mycenean royal family of Knossos were living in Archanes. Excavations in the village brought to light a well-preserved building that must have been a summer palace.
The area also gave very important elements about residential architecture, burial architecture and habits from the excavations in Fourni cemetery. On the foothills of the holly mountain of Jouchtas, in Anemospilia, a Minoan sanctuary was discovered, sacred not only to Archanes but to Knossos as well. And the history of the fine wine starts very early in time for Archanes, according to the findings in the Minoan mansion in Vathipetro, where a winepress was discovered. 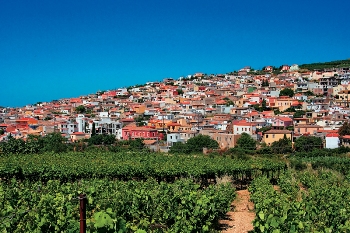